“Oos the bloke in the posh suit, Red Apron, and with the white stick”?

A question often asked by newly made Masons when they first see the Red Apron. Perhaps not quite in those words.

There are explanations of the significance of the Red Apron elsewhere on Masonic Sites (here for example), but what has it meant to me to wear one?

This year 2021 – 2022, there have been eight of us and we have shared about 25 Provincial Fraternal Visits and 6 Provincial Team Visits since September of last year.

Even if you are not officiating, a vital part of being a Steward is the willingness to attend and support the other Stewards when they are acting in their official roles.

If you are not willing to put the time and commitment in, this is not the role for you.

How they are selected is a black art unknown to me, but the choices made are usually pretty good. They will be men who have served their Lodge well, and been brought to the attention of the Rulers for “exceeding the requirements of the job”.

If you are asked to become a Provincial Grand Steward, think long and hard before accepting. Ask advice from one of the “Red Aprons”. It is a great honour, but it may involve more than you are willing to commit to.

The down sides? A lot of travelling, some times meaning an early start, a great deal of commitment, a lot of time required, and it isn’t cheap. Contrary to popular belief, we do pay for our own petrol and Festive Board.

The up sides? Too many to count. Visiting Lodges and Temples you have not visited before, meeting friends old and new, a great deal of pride, knowing that you have supported an important part of the working of your Province. Personally in my year (two actually) I have met and made seven of the best friends and commited Masons that anyone could wish for.

Fellow Stewards of the Province of Somerset, 20021-2022, I salute you and thank you for your support, friendship and commitment. 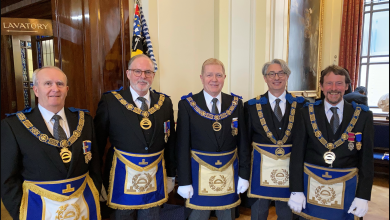