W/Bro Gordon Vinnicombe passed to the Grand Lodge above on Sunday 23rd August 2020 at the home of his partner Sam. Gordon suffered a massive heart attack without warning and despite the valiant efforts of Sam and the ambulance service personnel they were unable to save him.

Gordon was the current Master of St Kew Lodge no 1222 and due to the COVID restrictions had agreed to carry on as Master for a further year and then take on the role of secretary of the lodge. He was also a member of Tivoli Lodge no 9417 and was their almoner for the brethren & families and which he undertook with great pride, he was also due to take on the role of Innerguard. Gordon was also a member of the Holy Royal Arch and was a Companion of Inkerman Chapter no 1222 and was due to be installed as Principal Sojourner

Gordon was a well liked and  respected member of the craft and the Holy Royal Arch and was only to happy and enthusiastic to help and support others in their journey through masonry with his very positive and thoughtful attitude in all he undertook to do.

Unfortunately, due to the COVID restrictions only 30 invited mourners were able to attend the service but many Masons and friends of Gordon organised a Guard of Honour to line the approach road to the Weston Crematorium to show the respect they had for Gordon.

He was also escorted to the crematorium by a motor cycle guard of honour by members of the Widows Sons of Wyvern Chapter made up of brethren of St Kew Lodge, the service was also available on line to view for those who were unable to be there on the day.

Gordon will be sorely missed by his family, friends and masonic brethren. 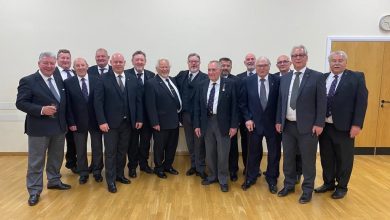 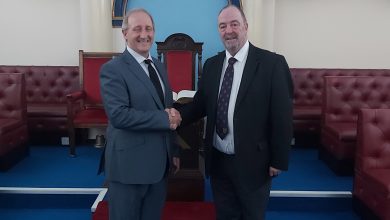