The Lodge of Science 437’s November meeting was a joyous occasion when the Lodge celebrated W Bro Barry Butlers 50 years in Freemasonry.

It was an especially poignant occasion as Barry has been very ill for a number of years and is now confined to a wheelchair. Undeterred by this, he still attends when he can and was determined to attend November’s meeting to receive his certificate in person from the Deputy PGM – Ben Batley.

The Lodge heard from Ben that Barry was a third generation Mason following in the footsteps of his Father who died at the age of 42. Fortunately for Freemasonry members of his Fathers Lodge continued to keep an eye on young Barry and at the age of 26 years he was Initiated into the The Old Masonians Lodge No. 2700 in 1972.

Eventually Barry joined us here in Wincanton where he worked through the offices and became Master in 2005, followed by becoming Lodge Secretary for five years. His hard work was recognised with a first promotion in 2011 to Junior Deacon in the Provincial Team and since then has been honoured with a further promotion.

The evening was rounded off with an excellent Festive Board, were everyone appreciated Barrys generosity by providing the wine for the evening. 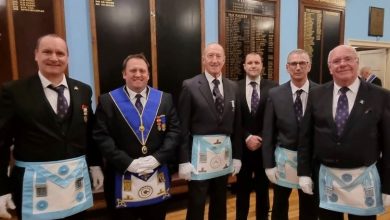