Due to covid lockdowns Worshipful Brother Malcolm Elder spent over two years in the Chair of Forest of Selwood Lodge. In common with most other Lodges it wasn’t meeting on a regular basis during that time but the brethren of 8912 still managed to raise over £1000 for Malcolm’s chosen charities, Frome POD and the local branch of the Motor Neurone Disease Association support group.

On Thursday 21st July, David Lyons, the Lodge secretary and Ray Guthrie, visited the group at one of their support meetings held at Palmers Green Garden Centre in Yeovil.

The group activities cover roughly the eastern half of Somerset from Frome to the Dorset border and it was interesting and humbling to hear of some of the problems people living with MND have and how much they value the support of the group. Roger’s wife passed away four years ago having been diagnosed with MND only two years prior, he still attends meetings to offer support and advice to newer members.

Heather Twine along with husband Tony are regulars at the groups meeting. Heather was diagnosed twelve years ago with MND and now has problems speaking. She demonstrated software supplied by the support group, for her phone and iPad, this helps with her speech. When she was first diagnosed she had her voice recorded and ‘banked’, knowing that speech is always affected by the progress of the disease. This means that the software on her phone actually uses her own voice rather than a computer generated voice.

Andy Graham, the area coordinator explained how he works with other agencies and the NHS to ensure that care for people living with MND is coordinated and of course every organisation needs a hard working treasurer, enter Vera Budge!

Unfortunately Malcolm Elder couldn’t be with us, not long after he relinquished the chair of the lodge he suffered a stroke and he is now a resident at Cadogan Court, the Royal Masonic Benevolent Institute care home in Exeter. No doubt he will be pleased that the presentation has now been made.

On behalf of the group Andy and Vera thanked the Lodge for the donation of £500, plus a cheque for £250 from the Somerset Masonic Charity. 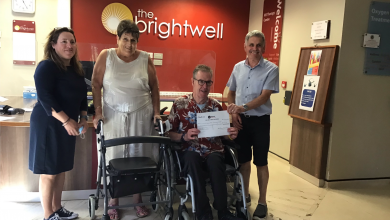 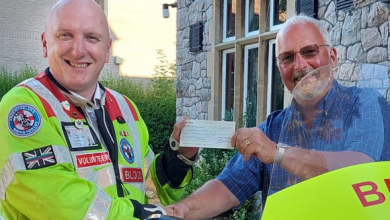 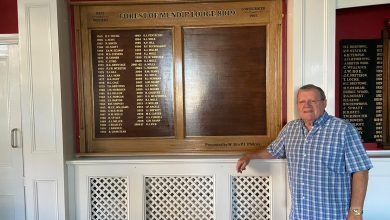 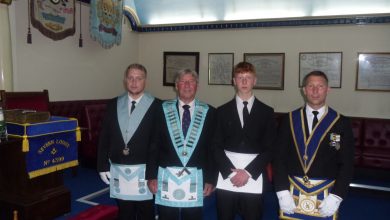